Chrome 57 comes with some serious upgrades 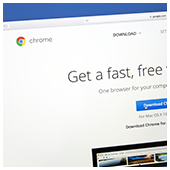 Google releases a new version of Chrome almost every month. Some updates involve minor bug fixes and improvements, while others feature many more exciting additions. For its latest release, version 57, Google announced some serious upgrades to Chrome, and here are the three we think you’ll be more interested in.

Google’s browser is a known battery hog. At one point it got so bad that Microsoft was publicly criticizing Chrome engineers for destroying laptop battery performance. Part of the problem is that Chrome allocates far more processing power to tabs running in the background than do other browsers.

Chrome for iOS gets a “Save for Later” feature

In what is probably a delayed attempt to catch up to iOS’s native Safari browser, the newest version of Chrome for Apple devices will feature offline reading. To add to your reading list, just tap the Share icon in the upper right hand corner of the browser and select “Read Later.” Even if you don’t have internet, you can view content from both the Unread and Pages You’ve Read sections of your reading list.

Although not quite as convenient, earlier versions of Chrome on Android have a roundabout way of doing the same thing. When clicking the the download icon under the Menu dropdown, Chrome saves offline pages in local storage.

Chrome is also getting a serious boost in terms of visual processing power. Google’s browser now supports WebGL 2.0, which improves the speed, textures, and animated effects of elements on websites.

Support for WebGL has yet to make its way to mobile versions of the browser, but desktop improvements should put graphics on par with the 3D graphics in most modern games. Firefox and Opera already support this standard, but its addition to the most popular browser on the internet creates a huge incentive for web designers to push the visual boundaries.

For those who have been in the small- and medium-sized business field for a while, it’s tempting to think that browser improvements really aren’t that big of a deal. But in an age when the majority of work is done inside of browsers rather than software, how you surf matters. For all the best news and tips, get in touch with us today!